Traffic Tickets Outside Your State 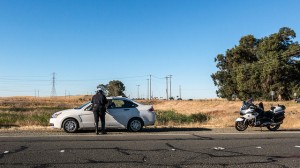 Traffic violations, particularly speed limit infractions, have a reputation for being charged while one is travelling outside of their home state. There seems to be some truth to this ill-fame for a number of reasons. Another assumption about out of state tickets is that somehow they will be easy to escape and that one’s home-state insurer will not find out about them. While it can be more difficult for a state to force payment from the resident of another state, yet due to voluntary information sharing among the states, the chances are that all major offenses committed out of your state will be reported and also affect insurance premiums at some point.

The Probability of Getting an Out of State Traffic Ticket

An out of state license plate seen whizzing by at a speed exceeding local speed controls is more likely to be chased down by a police officer than an in-state plate going past at the same speed. Once stopped; and it has been statistically demonstrated that the out of state driver has a 20% higher chance of being ticketed than his in state counterpart.

How An Out of State Ticket Can Affect You Back Home

Contrary to popular belief, out of state traffic tickets do indeed follow you home.

What To Do When Faced With Out Of State Charges

One option is to hire an experienced traffic ticket attorney, but you will have to look for a law firm that has an impressive track record of dismissing out of state traffic tickets. In some cases, it is suggested to hire a lawyer who resides in the ticketing state and understands that state’s laws and court process well. They can help you fight the ticket; perhaps aiming for a plea deal that can get the charges reduced significantly if not dropped.

To summarize all the details discussed above, its in the best interest of any driver who is issued a traffic citation outside their state to take it seriously and deal with it lawfully. With the advent of modern databases and information sharing, it probably won’t do to just ignore the ticket that may affect your driving record and raise your insurance charges.