Who Is at Fault When Intersection Lights Are Blacked Out or Not Marked at All? 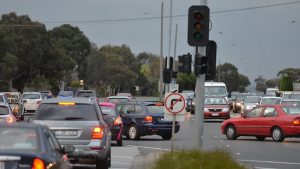 According to The California Driver’s Handbook…

Some drivers appear to be confused when faced with an intersection that has malfunctioning lights or no markers at all. The California Driver’s Handbook clearly states that blacked out intersections are to be treated as if there were stop signs on every corner. When traffic lights are out, drivers are required to come to a full stop, and then proceed according to normal right-of-way laws of the road. Although uncommon, traffic lights have been known to go out for any number of reasons.

However, California law does not see that as a reason for not stopping and calls it negligent driving. You can be cited for driving through an unmarked or blacked out intersection without stopping even if yours is the only vehicle present for miles around.

Intersections are dangerous places when normal traffic control is out of commission, and though they may seem unfair current traffic laws regarding this situation are written for your protection. According to public statistics, driver risk for accidents in blacked out intersections is double that of those with working lights.

What Happens When Fault Can’t Be Determined?

Most intersection accidents are violations of right-of-way rules but determining who is at fault isn’t always possible without an independent witness. Generally, both parties will claim to be innocent or give conflicting statements, and vehicular damage isn’t always considered conclusive enough as evidence. When this happens, insurance adjusters and the law have no choice but to determine fault on a 50-50 basis and both drivers are considered responsible.

California’s rules of the road are very plain but even so, never assume that another driver is going to stop just because it’s your turn to go. Stay alert and if it looks like another driver wants to take your turn, let them. Giving up your right-of-way is far easier and less time consuming than dealing with an accident and all the paperwork that comes with it. Documented evidence plainly shows that most accidents at intersections or anywhere else on the road are caused by one person ignoring another’s “road rights.”

Vehicular manslaughter is no joke and more than one person currently resides in prison because they caused an accident where another person died. According to statistics from the Federal Highway Administration, almost 50% of all reported accidents occur in intersections and nearly 25% of them involve fatalities. Many of these accidents occurred because of drivers treating blacked out intersections as “freebies,” and ignoring traffic rules.

Not all intersection accidents happen due to carelessness or poor driving skills. Many that happen at night are due to the fact drivers simply do not see them in time to stop when there are no lights to show them what’s coming up. If just the intersection lights are affected street lights reflecting off traffic light poles give you a little warning, if you’re paying attention. If the blackout is due to a general power outage the situation becomes even more dangerous because the street lights may not be working either.

Regardless of whether you see an unlit intersection or not, you’re still liable for any traffic incidents that happen because you didn’t stop. There are no road signs to warn us if traffic lights are out to use extra caution. Most of us don’t need that kind of advice because our common sense tells us what to do. However, there are those we share the road with that take caution a bit too casually and those are the ones you must look out for to avoid becoming just another traffic statistic.

Previous postHow to Fight a Marijuana DUI Case code 23152(b) Next postWhen Is Vehicular Search and Seizure Illegal?