Traffic Laws that Take Effect in 2014 in California 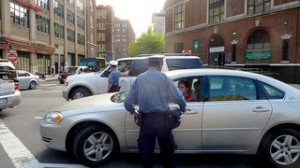 From free parking opportunities to new texting laws, the roads of California will see several changes in the upcoming year. New legislation has passed to better protect drivers and expedite some of the DMV’s paperwork.

Here are just a few of the new traffic laws going into effect as of January 1, 2014, unless otherwise stated. (Note that SB means “Senate Bill,” a bill originating in the Senate, and “AB” means “Assembly Bill,” one that came from the state assembly.)

No one under the age of 18 will be allowed to write, read or send a “text-based communication” while behind the wheel, even if their phone is equipped with a hands-free device.

Motorists will have to keep three feet between themselves and bicycle riders at all times. Known as the Three Feet for Safety Act, this legislation will apply to every driver on the same road and moving in the same direction as the cyclist. If three feet of distance is impossible, such as during rush hour traffic, motorists will still be expected to:

SB 806:The California DMV to Begin Testing the Efficacy of Digital License Plates

A statewide attempt to move away from costly and environmentally damaging metal, the bill allows the DMV to experiment with electronic monitoring in pre-approved test vehicles.

It also creates a new pilot program with the eventual goal of replacing all paper stickers and plastic-covered registration cards.

AB 1047: Traffic Test for Teen Drivers from Out of the State

Teen drivers with out-of-state learner’s permits will be allowed to take the road test in California and have their results digitally transferred to their state of residence. In addition,

Cars bearing a “Clean Air Vehicle” sticker will be allowed to use carpool lanes, or high occupancy vehicle (HOV) lanes, even if their passenger counts don’t satisfy occupancy requirements. To get these stickers, however, vehicles must be:

Among family members and living trusts, no vehicle can transfer ownership until all existing debts, fees and tickets have been paid in full to the DMV. Payments must be made by the transferee.

Under a joint program sponsored by the DMV and the California Department of Veterans Affairs, any interested veteran will be issued a “special interest” license plate with an updated design from previous incarnations. Veterans with a plate issued before January 1, 2010 may also re-apply for a new one at no additional cost.

If a driver is unable to provide proof of U.S. residency, they can still be issued a driver’s license by the DMV if all other requirements are met, including:

In cases where these requirements aren’t met, the bill will allow for new types of documentation to be accepted as proof. It goes into effect by January 1, 2015 at the very latest.

AB 332: Parking at Broken Meters for No Charge

Drivers will be allowed to park at broken meters for no charge.

These are just a few of the new laws that have either come into effect or are soon to be implemented. It is in the best interest of all California drivers to take note of these changes to avoid any issues with tickets.