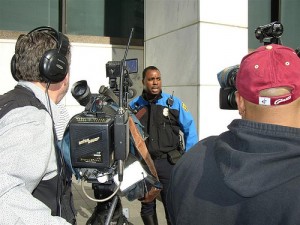 Sting operations by traffic cops can be described as a trap whereby the on duty police personnel are dressed as civilians to set up ordinary situations and observe if drivers follow traffic rules. Following this, failure to yield stings involve using cops dressed as civilians to ticket drivers who do not give way to pedestrians at both marked and unmarked crosswalks as required by the California traffic laws. Drivers who are caught failing to yield are issued citations and the publicity surrounding the event is typically used to raise awareness about this particular guideline.

In addition to raising awareness in the community about the issue, stings may also increase revenue for the state police department.

In California, vehicles are required to yield to pedestrians crossing the road at both marked crosswalks and intersections that are without marked crosswalks. This is spelled out in vehicle code 21950. However, the reality of the situation is that vehicles are dangerous and pedestrians are often understandably unwilling to press the issue even when they are in the legal right. These are some of the situations that failure to yield can create:

By some measurements, stings may be considered as an effective means to educate drivers and make the pedestrians aware of their rights on the road.

While the value of stings in terms of revenue may be uncertain, they appear to work where pedestrian safety is considered– if some major caveats are included.

If You Get a Failure to Yield Ticket

Being issued a traffic ticket is not automatically a no-win situation. In many cases, a skilled traffic ticket attorney can help you get the ticket dismissed. There are several different ways that this may be possible, which is why experience in the field is so important. Attorneys who specialize in traffic tickets know all of the legal ins and outs related to getting a ticket dismissed.