6 Ways To Defend Yourself In Traffic Court 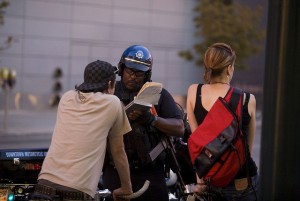 Getting a traffic ticket rates somewhere between nuisance and stressful for most people. The idea of going to court to defend against a traffic ticket is almost never considered as a realistic option because most people believe they can’t navigate the complex and sometimes confusing environment of the courtroom.

But with the right kind of preparation, it is possible even for an average driver to avoid paying for a traffic ticket that may have been issued in error or may have been issued on the basis of evidence insufficient to sustain the alleged infraction. A citizen’s rights attach to a traffic case no differently than they apply in any other criminal matter.

It is said that decisions are made by the people who show up. The same can be said for traffic court. Justice is dispensed to those who show up. All of the basic rules apply.

All of these items are, in fact, evidence in the case, so you might as well have them ready to go.

However, preparation starts on the roadside. Just like a traffic accident, a traffic ticket has associated facts that will bear heavily on the outcome of the case. The good news is you’re probably carrying a miniaturized television station in your pocket.

Do all of this the very moment it is possible without disrupting the traffic stop. This kind of documentation will be very powerful three months later when your adversary doesn’t have it.

Having a sheaf of papers and photographs to wave in the air in court is absolutely crucial. By doing so, you are taking advantage of the legal concept of “Res Ipsa Loquitur,” which is Latin for “the thing speaks for itself.” Take advantage of this. You can bet your adversary will.

In any criminal action, the state must prove the charge beyond a reasonable doubt to sustain a conviction. The defendant need only demonstrate a single reasonable doubt exists in order to establish grounds for acquittal. Reasonable doubt is a fairly low bar to clear, especially when discussing events with very likely a single witness that occurred months before dozens or hundreds of other traffic stops initiated by the same witness.

Your line of questioning should build on your understanding of your burden. Remember, as far as the defense is concerned, nothing happened. It is up to the witnesses to establish the events that took place and why those events constitute a crime under your state’s vehicle code.

Learn how to use the word “alleged.” It will be your best friend until you get the case dismissed or you are found not guilty.

Elements of the Infraction

In any criminal case, the state must additionally prove, beyond a reasonable doubt, that all of the elements of a crime took place and that the defendant was responsible. By the time you eat lunch the day after you receive your ticket, you should be able to recite, from memory, the elements of the alleged infraction in three languages.

Don’t argue with the judge. Call the judge “Your Honor.” If in doubt about courtesy in the courtroom, read the first two sentences of this section again.

A criminal case is about facts. In a contest between fact and opinion, facts win.

Many drivers faced with the possibility of defending a traffic citation choose to obtain counsel from a qualified attorney. This is often a good idea even if you think you already have a chance to win. Attorneys are familiar with court proceedings and understand well the process of obtaining an acquittal. If you choose to consult an attorney, it is best to do it as soon as possible.

Traffic tickets are no fun. But they aren’t automatic. If you learn the basics, you might find that ticket can be dismissed and cost you nothing except a little preparation time.