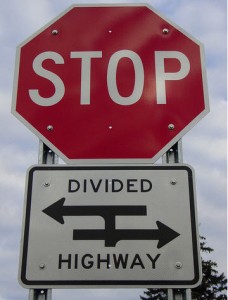 One of the most common traffic tickets issued to the drivers in the state of California is for the rolling stop default. When drivers approach a stop sign, they are supposed to make a clear stop. However, some people may be in a rush or may be tempted to only slow down at the sign and not fully stop. This can pose a danger to other drivers as well as pedestrians.

The article below discusses some of the important things that people may not know about rolling stop offenses.

In the state of California, drivers are required to make a complete stop at stop signs. This means that the vehicle needs to stop at the limit line. If there is no limit line, then the vehicle needs to stop at the intersection’s entrance. Slowly rolling through the intersection or pausing is in violation of the California law. A traffic ticket for a rolling stop costs roughly $140. Multiple offenses of this nature could lead to someone losing their driver’s license.

Often, people can pay the fine online or one may decide to contest the ticket in court. This could lead to a reduced fine or could have the ticket thrown out completely. It is best for anyone contesting a ticket to bring requisite documentation, photographs, witnesses, and proofs. The addition of traffic tickets to driving record results in points. To remove these points, you can attend traffic school. The more tickets you have been issued, the higher the traffic school fees will be.

Not adhering to railroad crossings and their associated stop signs is a lot more serious. This is because such an offense presents a real safety issue. Thus, the penalty for violating these stop signs is more than a regular rolling stop violation. The penalty for not completely stopping at a railroad sign can cost as much as $350. Just like other rolling stop traffic tickets, a driver can choose to challenge the ticket in court.

Another type of rolling stop default can happen at a traffic light. When the light turns yellow, drivers need to slow down. When the light turns red, cars need to make a complete stop and wait for the light to turn green. However, some drivers speed up when they see the light has turned yellow in an attempt to jump the light before it turns red. A driver in Long Beach can receive a ticket for running a red light or for a rolling stop, depending on the assessment of the police officer attending the site. Running a red light can cost nearly $500.

California officers are cracking down on rolling stops. More and more police officers are stopping cars that roll through stop signs without completely stopping. These tickets are costly and can add up to your insurance costs by adding points to your driving license. There are some drivers who like to believe the crackdown is to help the state with its financial issues rather than the safety and awareness of residents.

After paying the fine, drivers can attend traffic school to have the ticket removed from their records. However, if the driver is a repeat offender, he or she may be ordered to attend a traffic school anyway. These courses are generally held on Saturdays, though other options may also be available. People have to sit through lectures and videos and take a test to ensure they pass this course.

Drivers need to know how costly rolling stop penalties are in the state of California. The above discussion is aimed at making the drivers understand what to expect when they are handed such a traffic ticket and make them aware of the state laws. Coasting through a stop sign instead of making a full stop could result in an accident which is why rolling stop violations are taken very seriously.