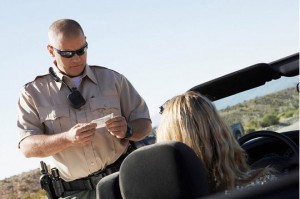 The Negligent Operator Treatment System (NOTS) in California is a computerized point count that keeps track of violations that incur points. Most violations are worth either one or two points. And the drivers who get enough points in a given period of time can have their license suspended.

It is worth noting that certain violations come with their own suspensions. These suspensions are usually separate from any other that will be received for obtaining too many points. For example, your license can be suspended for driving more than 25 mph over the speed limit. However, this also results in one point against your driving record, which can contribute to a future suspension if you exceed the allowed number of points.

1. Disobedience to a traffic officer– 1 point

Next time a traffic officer is telling you to stop when it seems unnecessary, have some patience and sit tight. The same applies to a fire official, a crossing guard who is not also a student, or a funeral escort officer.

2. Driving in the bicycle lane– 1 point

Although it is legal to drive in the bicycle lane in certain circumstances, such as when preparing to make a right-hand turn, it is usually illegal. Other exceptions include driving directly across the bike lane to enter or leave the roadway, and when parking legally. Otherwise, being caught driving in the bike lane is a one-point violation that will go on your record.

Tailgating is a ticketable offense in California, and earns drivers one point on their record. What constitutes “too closely” depends on speed and conditions. As well as simply being the safer option, making sure to have plenty of room between you and the car in front of you can spare you from this consequence.

4. Speed too fast for conditions– 1 point

Driving over the speed limit is not the only time you can be ticketed for speeding. The speed limit is the maximum speed that drivers are supposed to attain, not the speed they should always drive. Driving too fast for conditions usually relates to weather, such as fog, rain or snow.

Vehicles must be safe to drive in order to be allowed on public roads. Driving an unsafe vehicle can lead to one point against your driving record. Repeating the mistake after being informed by an officer that your vehicle is unsafe can lead to a second one-point violation, too.

In most cases, speeding is a one-point offense. Speeding on the Golden Gate Bridge is singled out because the bridge is owned and operated by a private entity. However, speeding on bridges in general is more unsafe than on most roadways.

Going faster than you are allowed is always a ticketable offense. However, going over 100 miles per hour, no matter how empty the roadway is, doubles the point penalty. A 30-day suspension is possible for this offense as well as the two points against your license.

So, you should now be twice as careful as you generally are because now the fines and penalties have also been doubled depending upon the offence and the state/ county.

Previous postLos Angeles Traffic Court Closures - What to Do? Next postHow Much Does a DUI Really Cost?