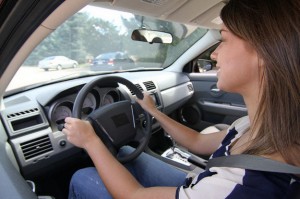 California, like many other states, uses a graduated driver’s license system. This means that young drivers must follow additional rules beyond those required of all licensed drivers. The goal of the program is to prevent driving fatalities, which are the lead cause of death for teenagers across the country.

There are two basic rules that limit holders of provisional licenses. The first states that provisional license holders may not drive between the hours of 11 pm and 5 am unless there is a licensed adult over 25 in the car. The exceptions to the rule are:

Teenagers who have provisional licenses may not drive other teenagers. This includes anyone under the age of 20. The exceptions are the same as above for the night driving restriction.

4. Violating license restrictions will not put points on a driver’s record.

Teenagers who are found to be violating their license restriction may be ticketed and fined or sentenced to community service, but they will not incur points against their license. However, the violation that they were originally pulled over for will often result in points against the teen’s license. Because a ticket for violating a license restriction is only given in conjunction with another driving offense, it is sometimes seen as a red flag.

If a teenage driver gets involved in an accident while violating their license restriction, they may still be covered. The scenario is seen as similar to a scenario where a driver who is speeding or runs a stop sign gets into an accident. Violating a license restriction may also not cause an increase in insurance costs, since it does not incur points. However, the primary offense of getting into an accident and receiving a ticket for that often will increase insurance costs.

6. The rules about points are stricter for teens.

While other drivers may receive as many as 4 points in one year before receiving a suspension, the rules are stricter for provisional licensees. Teens who have two points against their license in a 12-month period will receive a 30-day restriction, where they will only be allowed to drive with a licensed driver over 25 in the car. Teens who receive a third point will have their license suspended for six months.

7. The hands-free cell phone law does not apply to teens.

People under the age of 18 may not use cell phones or other electronic devices while driving, period. Even hands-free devices are not permitted. This includes laptops, tablets, e-readers, music players and other devices as well as cell phones, and prohibits both talking and texting.

8. There are good reasons for teen driving restrictions.

Some accidents occur due to inexperience, but many are caused by distracted and reckless driving. Because teens are inexperienced drivers, they are less competent to handle distractions while driving. This is why the license restrictions are primarily aimed at preventing distractions and keeping teens off the road when it is most unsafe for them.

Previous postHolders of Commercial Driver’s Licenses (CDL) in California Can Now Attend Traffic School Next postLos Angeles Traffic Court Closures - What to Do?