California Commercial Driver Laws are More Punitive in Many Ways 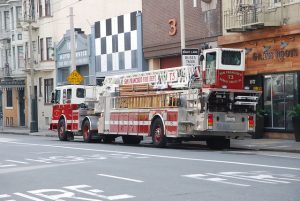 Many people choose a career as a commercial driver with a CDL (Commercial Driver’s License) to make a good living in a high demand occupation with the opportunity to travel throughout the country. To protect one’s ability to continue to work as a CDL driver, it is essential, as a California licensed CDL driver or as a driver licensed in another state driving through California, to be aware of the severe and punitive commercial driver laws that can adversely affect or even end one’s career as a professional driver. Care and knowledge of California’s Commercial Driver Laws can prevent devastating fines and punishments which can even include loss of a CDL and jail time.

A CDL commercial driver driving in/through the State of California who is ticketed for a moving violation must inform his/her employer within 30 days even if the infraction occurred when driving a personal vehicle. If a conviction for a California licensed CDL driver occurs out of California, a report form must be filed with the California DMV.

Failure to do this can result in civil liabilities of 2500 dollars for each offense and criminal penalties not to exceed a 5000-dollar fine and imprisonment not to exceed 90 days or both. In addition, points can be added to a driver’s record which can increase insurance rates. If CDL drivers accumulate more than 4 points on their driving records within a 12-month period, their license will be suspended.

In the State of California, unlike in many other states, commercial drivers face third lane violations under California Vehicle Code 22348 (c). This means that drivers can be cited if they are found driving either in the fast lane or in the lane immediately to the right of the carpool lane. They can also be cited if driving in the third lane of a four- lane highway unless they are one mile from making a left turn. Conviction of this infraction can lead to 1.5 points on their driving record or more if they hold an out of state CDL.

Moving Violations for Stopping or Parking on Side of the Road

Driving Too Slow or Blocking an Intersection in California

Under California Vehicle Code section 22526, a commercial driver is prohibited from entering an intersection or marked crosswalk unless there is sufficient room in which to complete the maneuver. Commercial drivers can also be cited for driving too slowly in the left lane causing a backup of vehicles unless passing a slower vehicle.

California has instituted a punitive set of rules and regulations for Commercial drivers many of which are different from many other states. Violations of these laws can result in profound consequences and career-ending punishments for inadvertent mistakes. If accused of a traffic violation in California, it is essential to retain an experienced California Traffic Attorney who can investigate all circumstances of the incident and determine the best defense of one’s crucial livelihood.