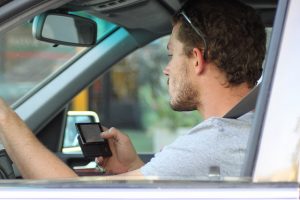 Many Californians either talk, text or access social media and apps while they drive. Using a handheld smartphone or cell phone is illegal for all Californians, regardless of their age. People who are cited for violating the cell phone law may be cited under California Vehicle Code 23123.5, which prohibits talking, texting, emailing or reading cell phones messages while driving.

More and more officers are instead choosing to charge people who are stopped for talking or using their cell phones while driving under 22350. This section is the basic speed law violation prohibiting driving in a manner that is unsafe for the conditions or that endangers others.

Why Officers are Citing Drivers Under CVC 22350

More and more officers are choosing to charge drivers under CVC 22350 instead of 23123.5 for several reasons.

When people are talking, texting or using social media while driving, they are diverting their attention away from the road. This is dangerous, and officers observe these distracted drivers committing many other traffic offenses about which the drivers are simply unaware. Some of the most common violations law enforcement officers observe these drivers doing include the following:

What is Allowed and What is Prohibited

While even using hands-free devices while driving can be distracting, doing so is legal for drivers who are older than 18 in California.

It is unclear whether or not people are allowed to check GPS on their phones while they are driving. The California Highway Patrol states that if a person is seen looking at their phone while holding it, they will be ticketed.

When a driver is stopped for using his or her cell phone, he or she may receive a ticket under either CVC 23123 or CVC 22350. If he or she is convicted, the driver will be fined and pay surcharges that are attached to the offenses. If they fight their ticket in court and lose, then they may also be charged court costs.

People who drive while using their cell phones may have their attention distracted away from the road. Because driver distraction greatly increases the risk of accident involvement, law enforcement officers do stop and ticket drivers who the officers observe using handheld cell phones. Convictions may lead to increased insurance rates in addition to the fines. Those who are charged may want to consult with a traffic ticket attorney for advice.