Challenge the Accuracy of the Radar Gun That Clocked Your Speed 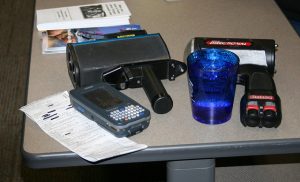 While it is becoming increasingly difficult to challenge the accuracy of a radar instrument that clocks the speed of a driver, primarily due to advances in technology, there are still a number of factors that can lead to inaccuracy in the use of a radar gun. If you have been ticketed for speeding, and you are deciding whether or not to challenge the fine, there are some things that you should know that will help you if you decide to fight the ticket.

If the officer that ticketed you used a radar gun to clock you, the first thing you will want to do is determine whether or not there is any grounds on which to challenge the accuracy of the radar gun that was used.

The truth is officers can use a number of methods to determine the speed of your vehicle, including following behind you and using their own speedometer to measure your speed, or they can use a stopwatch known as a VASCAR. But, if they use a radar gun, there are certain criteria that must be met, which include:

When tested, the six most used radar guns all produced clocking errors under certain conditions.

Radar guns are highly sensitive to any type of device that can emit frequencies and vibrations. Due to the high likelihood that the police officer was in close proximity to their cruiser when they clocked you, there could have been interference from a number of components associated with the vehicle, including the alternator, the radio, ignition noises or any other mechanical noises nearby.

Locking On To the Wrong Target

It is suggested by the National Highway Traffic Safety Administration that the auto-lock feature on radar guns be disabled. The auto-lock feature automatically locks on to a particular vehicle and follows it until it gets a speed reading. The problem with auto-lock is that it can lock onto the wrong vehicle when more than one car is traveling in the sight of the radar gun. The auto-lock can cause false readings that can be challenged in court.

Officer Training on Use

It is not only important for law enforcement officers to be trained to calibrate the radar gun they will be using, but they must also be trained in the proper way to use the radar gun to increase the accuracy and dependability of the readings. For instance, an officer attempting to clock cars coming out of or entering into a curve will get an erroneous reading. This would be something that would be pointed out in training. The same could apply to using the auto-lock feature, or attempting to clock vehicles in a highly trafficked area.

When the time is taken to conduct a thorough examination of all of the facts surrounding the charge of speeding, you may be able to uncover at least one factor that can cast doubt on the accuracy of the radar gun at the time it was used. The guidance of an experienced attorney that has been trained to recognize many of these oversights will likely produce better results, and if you look hard enough, you may find what you need in order to win.