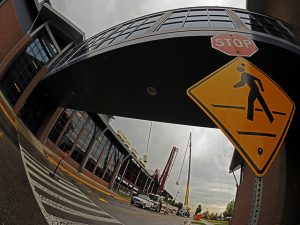 2017 marks the year of many changes within the Los Angeles area relating to various road and traffic laws. To many, this is an exciting development that will eliminate a lot of traffic and road accidents. One of these new laws relates to pedestrians in crosswalks which just began in March.

There have been a drastic increase of pedestrians getting hit and killed. According to abc7.com, 11 pedestrians were killed in the San Fernando Valley area due to traffic collisions this past January and February. Many pedestrians are looking at the ground, and they are playing with their mobile phones while cross walking.

Another concern is the mortality rate of pedestrians.

As a result, LA Times said that Los Angeles have seen much talk from Mayor Eric Garcetti and a little action. He has ideas that have its merits for safer roads for everyone; however, only little improvements have been done.

Nevertheless, some measures have been taken so far. For one, police officers in Van Nuys have been wearing regular clothes, and they have issued warnings to drivers failing to stop in marked crosswalks. Also, pedestrians who are using their mobile devices and not paying attention while walking on crosswalks have also been stopped and ticketed. Other than that, officials are given safety educational measures, such as the following:

This is just the beginning of measures that has been taken, and the city officials are looking to install more safety measures for Los Angeles busy streets.

With the first primary election just occurred a few weeks ago, it’s still too early to determine the result of most of these bills. Other than that, a hearing has been initiated for a few of these bills, and these bills have two years to undergo the legislative process.

With all these changes within the Los Angeles area, tons of accidents relating to traffic and roads will be prevented. The city officials are also working to implement other safety measures which is very optimistic to many in reducing the mortality rate, to ensure their children are travelling safely to and from school, and safety for everyone.