Flow of Traffic Versus Speed Limit 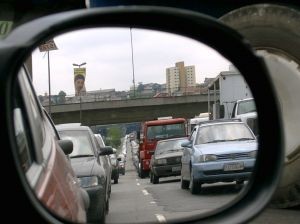 There are a number of traffic laws on the books for which a traffic police officer can issue you a citation. There are some violations that may earn you a night or two in jail, if you are not careful of the traffic laws in your state or visiting state.

One common traffic violation is speeding, although it is considered as one of the most understood traffic rules. It is an immensely simple regulation to follow i.e. do not exceed the posted speed limit, and consider the driving conditions even when driving within the posted limit.

There is a common traffic myth that you will not be ticketed for speeding if you are driving with the flow of traffic. However, this is not true, and we explain in this blog post why pleading this type of reasoning to a police officer is probably not a good idea, and why you definitely don’t want to use this line of reasoning as your defense in court. There is one other myth associated with speeding that warrants an honorable mention.

There is a common assumption that driving the posted speed limit affords the driver an exemption from getting a speeding ticket. However, this is not completely accurate.

Nevertheless, it is important to understand that the posted speed limit is not an automatic number of traffic ticket exemptions.

Driving With The Flow Of Traffic

There is a longstanding myth that implies that driving with the flow of traffic is also an exemption from being ticketed by a law enforcement officer. This is far from true.

Speaking of the process, you definitely do not want to use this type of reasoning with the judge, or you might as well simply pay the fine and save yourself a trip to the court. Others breaking the law is never a justifiable reason for you to break the law. Rather, you may consider taking the time to research the speeding laws and prepare for your court day.

There are a number of defenses that have proven to be effective in fighting speeding tickets, especially challenging the calibration and accuracy of the radar gun.