New Law for Cellphone Use While Driving Effective January 2017 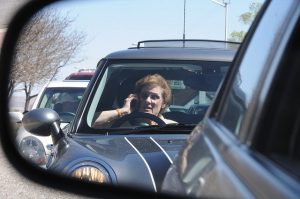 Using your cell phone and driving your car seems like a surefire way to get into some kind of trouble. However, for many people, there is apparently reason enough to take that risk. According to a 2014 study conducted by the National Safety Council (reported on http://stoptextsstopwrecks.org), cell phone use while driving was responsible for 26% of all U.S. car accidents, and California was one of the states with the highest percentage increase.

Though state laws may have decreased the number of phone conversations, activities like setting up and checking a GPS or navigation APP, or activating a music playlist have actually increased. As a result, there is a nationwide trend to crack down on distracted driving. This has led to many states reviewing their existing laws and also to the creation of a government website called Distraction.gov.

The state of California passed its first cell phone related law in 2006. This law banned the hand-held use of cellphones while driving. Talking on the phone or texting were no longer legal. However, other functions, like the use of a navigation system and even taking a selfie remained unregulated.

All of these results indicated that the existing law was insufficient.

There are fourteen states that have laws pertaining to cell phone usage, each hoping to minimize distracted driving. The goal of California’s new law is to reduce the number of traffic accidents due to cell phones. But even if you find the correct mount, and place it in the perfect location in your car, there is no guarantee that using your phone won’t distract you.

Phone videos, FaceTime, Tinder, and many gaming APPS can be activated and maintained with a single swipe so it is easy to legally pay attention to something other than driving. The fines also do not seem steep enough to provide any deterrent and there is no cap on the number of infractions that you can incur. Also, California legislators believe that residents aren’t identifying the high level of risk so part of their goal is education. The message is posted on multiple government communications and hopefully people will begin paying attention.