Serious Consequences of Driving with a Suspended License 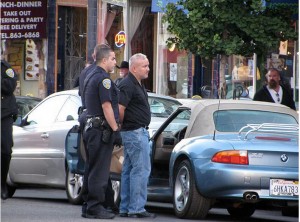 A driver whose state-issued driver’s license is under suspension receives an official letter from the Department of Motor Vehicles. The reason for suspension is clearly stated in the letter along with the duration of time that the driver is not legally authorized to drive. This suspension is associated with severe crimes, or traffic violations, involving a motor vehicle as stated below.

• Commission of a crime, including murder, while operating a vehicle
• Fleeing the scene of a crime or eluding an officer in a vehicle
• Fraudulent use of a driver’s license
• Driving without auto insurance
• Leaving the scene of an accident, or hit and run
• Racing on city streets
• Forgery of identification documents
• Refusing to undergo testing following a DUI arrest
• Failure to appear for a traffic-related court date
• Violation of the controlled substance act in the state
• Reaching the maximum limit of points on the license in a given period, usually two years
• DUI conviction

In addition to the above, driving vehicles when the licence of the driver is suspended for one or the other reason may invoke harder penalties. They are as follows;

Following a citation for driving under a suspended license, the judge can invoke an additional suspension period. Circumstances determine whether the term extended is six months, one year or permanent. Each state has specific guidelines that are based on the precedent set in previous cases. The judge does not set penalties arbitrarily. Repeated offenses can result in more severe penalties. The judge’s goal is to correct the behavior; i.e. disregard for the law.

A citation can be accompanied by monetary penalties that are intended to impart sufficient financial difficulty. Each state has different amounts for fines that are imposed for a first-time and subsequent offense. The driver is required to pay the fine or serve jail time. Sometimes both penalties are imparted when the judge determines that the situation calls for a stricter action.

Most judges save the jail sentence for repeat offenders. Multiple citations associated with operating a motor vehicle will cause the judge to impart up to one year in jail. Certain states have mandatory jail sentences for certain repeat offenses. The initial jail term could be 10 days. A second conviction could result in 90 days in jail. All convictions after the second would result in 180 days in jail. The purpose of a jail term is to bring down the occurrence of abhorrent behavior in the defaulters.

INSURANCE AND THE SUSPENDED LICENSE

Following a driving citation that results in suspension for some other reason, the insurance company requires the driver to obtain an SR-22 certificate from the Department of Motor Vehicles. The car can be insured, but the driver will not be able to drive it with a suspended license. Violation of this agreement will result in cancellation of the insurance policy.

DRIVER RESPONSE TO THE SUSPENSION

Careful examination of the reasons for the suspension can provide a path to correcting the situation. A driver without an insurance policy should purchase insurance and correct the situation. Criminal convictions cause the driver to serve the sentence associated with the crime. In such situations, do what the court says to reclaim the driving privilege. Ignoring the suspension and driving without a license is the worst possible choice. Subsequent instances where an officer catches the driver operating a vehicle without a license will lead to further problems.

Mistakes can be made in the DMV, so the driver should be aware of the possibility of a surprise when stopped for a traffic law violation. A driver who believes the license should not be suspended must keep the court date and address the judge. This driver would not receive a letter in the mail. The judge will listen to the situation accompanied by the supporting information including a copy of the driving record. However, remember that attempts to correct the situation may take some time.

Most drivers realize that licensed driving is a privilege associated with freedom. Actions that are compliant with the law of the state of residence will sustain the privilege for many years. Insurance companies and the authorities work together to reduce the risk to other drivers and property owners. Drivers who demonstrate irresponsible behavior are removed from the driving pool using all possible means.