Which Cars Are More Likely To Be Noticed And Pulled Over 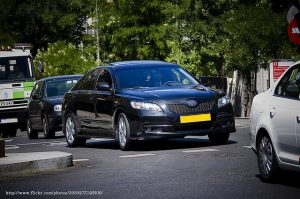 It has been a long-held belief that people who drive flashy red sports cars are far more likely to get pulled over and ticketed than, say, a person driving a white sedan. While this may not necessarily be true, statistics do show that the make, model and color of the vehicle you drive do play a role in how likely you are to be ticketed.

Unfortunately, this seems to indicate that police officers are slightly prejudiced against certain types of cars and even certain types of drivers. For this reason, you might want to carefully consider what type and color of car you drive if you want to lower your chances of getting a ticket.

Color of Your Car Affects Your Chances of Being Pulled Over

Many people believe that someone who drives a red car or some other brighter, more noticeable color is much more likely to get pulled over. However, the statistics don’t actually back up this claim. In fact, it seems that people who drive white vehicles are actually the most likely to be pulled over. That being said, red vehicles get pulled over the second most often, followed by grey and then silver vehicles.

Of course, the fact that nearly 70% of the world’s vehicles are white, black, grey or silver may help to explain why these colors get pulled over more often since there are simply more of them on the road. Alternatively, red cars only make up only around 10% of the cars in North America seems to indicate that this color is still targeted more frequently by officers. Interestingly, black vehicles actually get pulled over much less than many other colors, despite the fact that black is the second most popular color in the United States.

Makes and Models Most Likely to Get Ticketed

In addition to the color of your vehicle, the make and model also affect your chances of getting ticketed. Statistics show that luxury coupes and sedans generally receive the most tickets, whereas drivers of minivans and wagons tend to receive the least number of tickets. In terms of the most-ticketed vehicles, both the Subaru WRX and Mercedes-Benz SL Class rank near the top. In fact, Mercedes-Benz SL Class are about four times more likely to receive a ticket than the average driver.

Other vehicles that are frequently targeted by police include the Pontiac GTO, Toyota Camry Solara, Toyota Supra, Hummer H2. Scion FR-S and Scion tC. On the other hand, the Chevrolet Suburban, Buick Park Avenue and Jaguar XJ are amongst the least-ticketed vehicles on the road. When examining the statistics, it seems that people who drive sportier cars like coupes or those models designed for younger people are much more likely to receive tickets, whereas people who drive more family-friendly models like SUVs, minivans and sedans are much less likely to be ticketed.

Your Gender Also Affects Your Chances of Getting a Ticket

Studies have repeatedly shown that men are much more likely to receive tickets than women. To be specific, men are ticketed approximately 30% more often than women. This is especially true for men who drive flashy cars or more expensive foreign-made vehicles. This means that if you’re a man who enjoys cruising around in a high-performance European car, you might want to get used to the fact that you are much more likely to be ticketed than you female counterparts.

Although your gender and the make, model and color of your vehicle may have some effect on how likely you are to be pulled over and receive a ticket, it is important to note that these are not the only factors. Police officers still need an actual reason to pull you over, and this reason can’t simply be because you were driving a red or white sports car. This is why it is always a good idea to practice safe driving behavior and make sure that you’re not distracted if you want to lessen your chances of receiving a ticket.