7 Ways To Avoid A Speeding Ticket 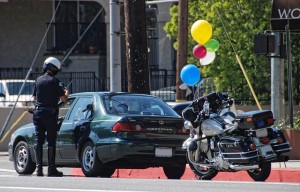 Sometimes, we all fall behind schedule, and the temptation is to drive to our destination as quickly as possible. However, this can wind up in a speeding ticket that will cost points on your driving record and possibly drive up your insurance rates. Here are some ways that can sometimes help avoid getting that speeding ticket.

The Don’t Stand Out” Technique

One of the strategies is the “Don’t Stand Out” technique. A good rule of thumb is to go with the flow and keep to the right when you are in unfamiliar areas, especially if you are from out-of-state. Do not drive aggressively, and keep your car clean, decluttered, and free of bumper stickers that are anti-police or pro-violence.

Avoid these types of things that draw police attention:

Go With The Flow

A variation of the “Don’t Stand Out” technique is to be in a train of cars all driving at your speed.

Drive At A Constant Speed

A precaution for everyday defensive driving and not just to avoid speeding is situational awareness.

In defensive driving, a good practice is to look 5 seconds ahead to anticipate traffic events. However, if you are driving at higher speeds, it’s even better to look 12 seconds ahead. That distance corresponds to the range of a police radar, and will give you time to slow down and avoid a speed trap.

Another strategy, if you’re going a little too fast, is to acknowledge an officer in a lurking cruiser in a friendly way.

Don’t Admit You Were Speeding

Another strategy if you are pulled over, is never to admit you were speeding. According to a former police officer;

GPS navigation systems can download additional Points-of-Interest (POI) software that tells you when you are approaching stoplights with traffic cameras. Links to the software are available on GPS manufacturers’ web pages. Alternatively, you can spot where such video cameras are by their profile on or near traffic lights and memorize their locations for next time.

At the end of the day, the best strategy is “Don’t speed!”. It’s better to arrive late or to miss an event than be involved in an unpleasant situation on the road.