Attempts to Avoid Speed Cameras Could Lead to More Trouble 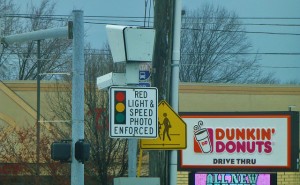 Traffic enforcement or speed cameras have become a part of daily life in many cities. These cameras can have a wide variety of functions; however, the two most common are speed detection and traffic signal violations, e.g. running a stop sign or red light. They can even monitor appropriate use of bus lanes in large cities.

Since their introduction, many people have endeavored to find ways to outsmart or trick these devices in order to avoid penalties, including citations. Unfortunately, these tactics come with risks of their own.

In numerous jurisdictions, including California, attempting to interfere with these widely unpopular devices is against the law. This includes using products designed to protect license plates against being photographed and/or distorting the face of the driver.

A driver may attempt to avoid detection by removing or covering the reflective coating on a license plate. This would theoretically reduce the likelihood of visual or electronic recognition; however, the efficacy of these tactics are untested and they are clearly prohibited by law in California and other jurisdictions.

Tinting windows to avoid facial recognition can cause difficulties as well. Most states have laws that determine the maximum amount of tint that drivers can apply to the front windows.

Municipalities are continuously upgrading systems and software, meaning the recognition is becoming increasingly likely. Traffic officers frequently carry a card with them to test window tinting and can issue citations to drivers whose windows are too dark.

Other Tactics For Avoiding Speed Cameras

Driving at or just below the posted speed limit and slowing down near intersections are more legitimate means by which many drivers attempt to avoid citations associated with speed cameras. Others opt to slow down just prior to reaching an area under camera surveillance; however, that can potentially result in an accident.

Overall, attempting to outsmart speed cameras is not worth it, especially when it comes to using illegal means to do so that may result in serious penalties. Frequently used methods, such as obscuring car tags or tinting front windows, can involve citations and other consequences. No method offers one-hundred percent freedom from detection; however, driving the speed limit and obeying traffic signals are options chosen by many drivers.