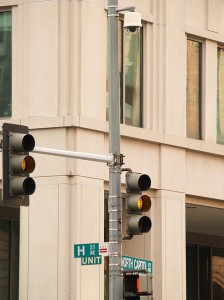 Technology has brought many changes to the world, including the ability to remotely record activity. With the use of red light cameras, municipalities can use a combination of video surveillance and sensors to record when a car runs through a red light. The owner of the vehicle captured on video is then sent a citation for the traffic offense.

There was a time when people routinely ignored these tickets, but this is no longer the wisest option after the People VS Goldsmith case. In this case, the tickets were challenged as being unconstitutional, and the courts ruled that the pictures and videos recorded by red light cameras are admissible in court.

Red light tickets were ruled inadmissible in court because they could not show the information source or data regarding how the video was prepared. However, cities have improved their use of technology.

The defense tried to argue that the video evidence was actually hearsay because there was no person to be cross-examined. However, the court ruled that they were not a statement at all because they were computer generated.

This ruling from the Supreme Court of California was unanimous. The Justices in this case agreed that video surveillance and pictures have long been used as a ‘silent witness’ to various activities and events. Chief Justice Tani Cantil-Sakauye expressed an opinion that the video evidence is presumed to be accurate.

You Must Address The Red Light Photo Tickets

The fact is that a red light photo ticket is just as legally binding as any other traffic citation.

You may even choose to consult an experienced attorney to represent your case in the court.

The Driver And Owner Are Two Different People

One of the big concerns with red light photo tickets is that the driver who runs the light may not be the person who owns the car and receives a citation. Even in this case, the ticket cannot just be ignored.

When you receive a red light ticket in the mail, it’s important to treat it with the same respect as a traditional ticket received in person from an officer. Failure to appear for a red light ticket is a misdemeanor offense, so you must follow through with the legal process. The courts may dismiss the case, but it must be done through the proper channels.

If you require more advice or information regarding a red light ticket, you may want to consider meeting with an attorney to discuss your options.