Traffic Speed Radar Errors You Should Be Aware Of 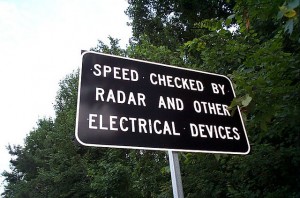 Speeding tickets are a significant part of municipal and state revenue, and these tickets are almost always issued based on the readings produced by speed radar. However, there are some radar errors that are the result if the innate fallibilities of the design or radar guns. These errors can be used by motorists to effectively defend themselves against speeding tickets issued based on radar readings.

Discussed below are a few such errors that you must be aware of in order to determine the legitimacy of the speeding ticket issues to you.

One of the most common errors associated with stationary radar is the look past error.

If you have been ticketed under circumstances similar to those mentioned above, it may be worth it to challenge the ticket based on what is known as the look-past error.

Another common issue with speed radar is the fact that it has a tendency to pick up the largest object in the approaching traffic within range. While an officer may be pointing the antenna at specific vehicle, it is possible that the radar could be picking up the speed of a larger vehicle behind the targeted vehicle, such as an 18-wheeler as much as a mile or more behind the vehicle that the officer is attempting to clock.

Technical mistaken identity is more common than most people realize, and there is a possibility that a defense based on this type of error may actually prove effective.

A cosine error occurs when a moving radar locks onto a stationary object, such as a building or large road machinery, that is positioned adjacent to the road on which the traffic that is being clocked is traveling on. The reason that the radar picks up these types of objects is the fact that they serve as a more efficient reflector than the horizontal pavement that the radar should be locked on to.

Due to the fact that this type of error is common, it may prove to be a viable defense for someone who has been ticketed for speeding in an area in which there are a number of sizable objects adjacent to the road.

Even though using the aforementioned radar errors does not guarantee that a speeding ticket will be dismissed, but these types of defenses have been effective in a number of cases. It is important to understand that each situation is distinct, and a person will have to determine what they believe is the route that will prove most efficacious.