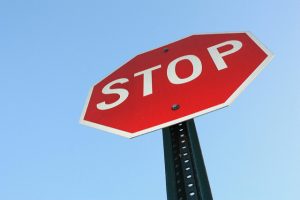 As the penalties for failing to honor traffic rules increase – penalty points and rising fines that heavily affect insurance premiums – a lot of drivers are reluctant to accept even justified tickets as a road tax.

Stop sign tickets are citations that quickly dent a driver’s wallet and burden their license with demerit points. The odds of fighting a stop sign ticket may be long.

However, if you do your homework and understand every nuance of the law, you could walk away victorious.

Challenge the Subjective Conclusion of the Officer

With many tickets, it is fairly possible for a driver to challenge the officer’s view of the occurrence. It is particularly true in a situation where the officer makes a subjective conclusion as to whether the law was violated.

There are conscientious drivers however that choose to stop further back from the marker line. In such case, an officer who is about 50 feet away may not clearly see whether the driver stopped or not. Your first defense in such a scenario could be taking pictures from the position of the officer. More so, try capturing an obstruction. Convincingly, testify you did stop and the case would be in your favor.

Challenge the Observation of the Officer

If the law necessitates an observation from the officer,a heated argument about whose facts are right may arise. If you are cited for failing to stop, the person who wins the case will depend on the judge’s verdict. Unless you can fully prove your case beyond reasonable doubt, traffic officers often win.

It will depend on how well you cast doubt on his ability to perceive the incident accurately. Understand that fighting a stop sign ticket is an uphill battle. So, what evidence would help you convince the judge that the officer’s judgment is inaccurate?

Prove you were Legally Justified

Depending on the circumstances of your purported violation, you could maintain that your actions were justified. It is more of offering factual details that legally justify your otherwise unlawful conduct. For instance, if you were charged with failure to stop, it is a legal defense to argue that you had to avoid another driver who was breaching traffic laws. Such a defense can be successful since it raises facts instead of just contradicting the proof of the officer.

Running a stop sign may be open to the presentation of evidence to avoid paying the ticket based on a mistake of fact. Understand that it is not a mistake of fact to say things like – you had no information of the illegal act.

If you regularly use a stretch of road, it would also be a mistake of fact of fact if a stop sign was installed the previous day. You would prove that you had insufficient notice.

Prove your Conduct was justified to Avoid Harm

If you can prove you failed to stop to avoid an out-of-control vehicle, it is easy to beat a stop sign ticket charge. The thumb of rule is to argue that you had to violate the law, to avoid a major immediate danger to yourself and other people.

Simply because you were issued a stop sign ticket doesn’t mean you deserved it. Fighting the ticket can be tricky, but putting on effort and having a law firm represent your case in the court of law can pay off. The five approaches could help if you plan to contest a stop sign traffic ticket.